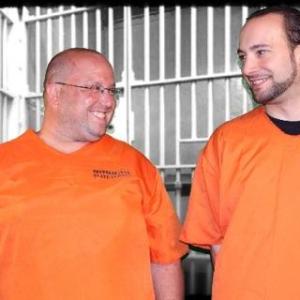 The Black of Space® was formed from half of an original band called, “Sodden”, which was conceived in their high school years. Sodden is a significant part of The Black of Space, simply because 3 previously unreleased, unrecorded Sodden songs crossed over to the 2-piece project, now known as, “The Black of Space”.

The Black of Space is Phil Laudin and Jimmy Skelly, a duo proudly writing and producing rock/metal-flavored music from the hip – not aiming to please any one genre, integrity is the fabric of the music they create.

The initial recording (released 4/20/15) is a self-titled album consisting of 7 songs (3 of them being previously unreleased Sodden tunes), ranging from 2 minutes to 7+ minutes.

The listening experience itself is a journey. There are many musical flavors to beguile throughout. People who have had the opportunity to screen the album mostly brand it as “different”, having been compared to the sounds of Seattle, Primus, Mr. Bungle, and Zappa alike, all blended into their own brand of musical eccentricities.

The songs were recorded and produced by both members, mixed and engineered by Phil Laudin, and completed during the year 2010. On this recording, Jimmy Skelly hammers out some very impressive and progressive beats on his 300-degree monstrosity of a drum kit, and appears on some tracks with some backup vocalizations. Phil Laudin takes the role of lead/rhythm guitars, bass, keys, and lead/backing vocals. So what took so long for the recording to be released?

The Black of Space auditioned and worked with a good number of musicians in the nearly 4 years between the completion of the recording, and its eventual release in April of 2015 – some players stuck around for close to a year before telling the band in so many words that it wasn’t their thing, while some stuck around for only a couple sessions. Although all were excited to start, with the prospect of becoming co-writers with the band for future recording endeavors, under the pretense that they learn the band’s 7 previously-recorded songs, however, none made it that far.

Because the bass lines on this monster-piece are seldom the same from one song verse to the next, the songs become structurally demanding; changes in timing/time signatures come from out of nowhere; transitions tend to flirt with the avant-garde, in that the very style of the song(s) can change at a moment’s notice. This all due, in part, to Jimmy’s amazingly eclectic drumming style – putting it this way, every bass line that Phil came to the table with was immediately scrapped as soon as they were put up against Jimmy’s crazy drum-fills and relentlessly unforgiving changes. Although the bass lines are tricky to not only remember, but to execute as well, they make all the difference in driving the songs through the journey. Unfortunately up to this point, no bass player seemed up to the challenge to recreate them live.

Their live shows feature background music from actual tracks off their debut album, which accompany the boys while they rock their instruments as they do. The often-demanding time-changes favored in their music keep things interesting and exciting.

*Contact The Black of Space – we’d love to hear from you!